Sysmon version 14.0 was released on the 16th of August 2022. The new version introduces a new Event ID: 27 FileBlockExecutable. It is kind of new for sysmon to block something from happening completely. So, it was interesting to think of a way to bypass it!

I came across this post by Olaf Hartong. In this post, Olaf was previewing the new event and how it works on a surface level.

The same is true for an DLL/XLL/WLL file since that will share the same MZ header.

It seemed apparent that the new rule is using the MZ header(explained below) to detect if the file is a Windows executable or not.

Taking the simple config file from the post for demonstration purposes, I installed Sysmon 14.0 on my Windows 10 VM and set the config file below. The file basically sets the rule to fire on any executable file in the Downloads folder of any user.

I also wrote a very simple executable which prints out “Catch me if you can, Sysmon!”. This is the executable that I’m going to try to drop and run from the Downloads folder. This executable as a start is placed in Documents\App.exe.

In an actual attack scenario, the executable file (PE) would be recieved from a remote server or perhaps embedded in the malware dropper itself. However, this is for demonstration only so it shouldn’t really matter as Sysmon doesn’t care where the file originated. All it cares about is the writing of an executable to the folders specified in the rule.

I also opened the event viewer and set a filter for event 27 at Application and Services Logs/Microsoft/Windows/Sysmon/Operational. 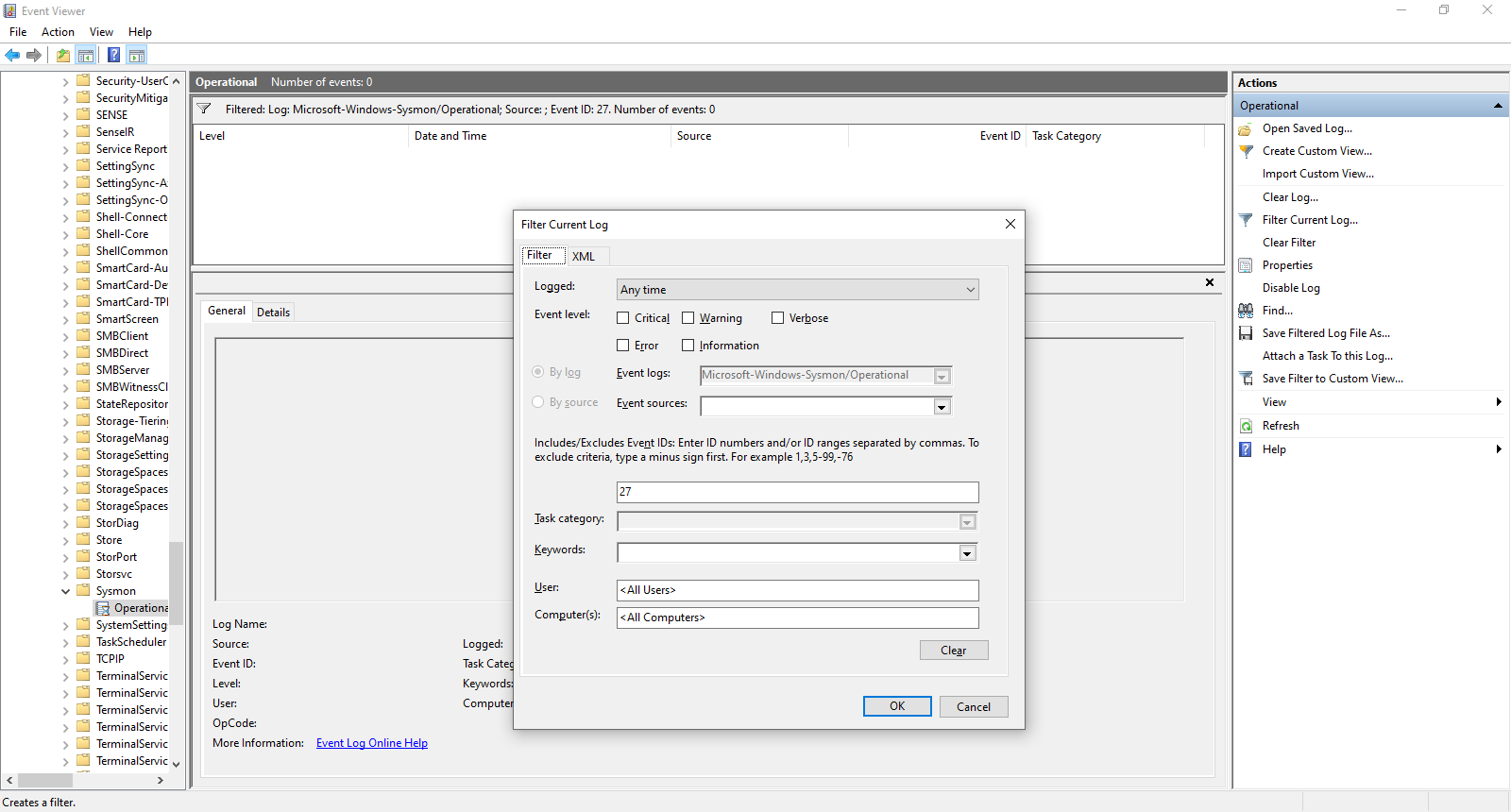 To verify that Sysmon is working and will detect attempts to write an executable in the Downloads folder, I used the following simple program to write the file. 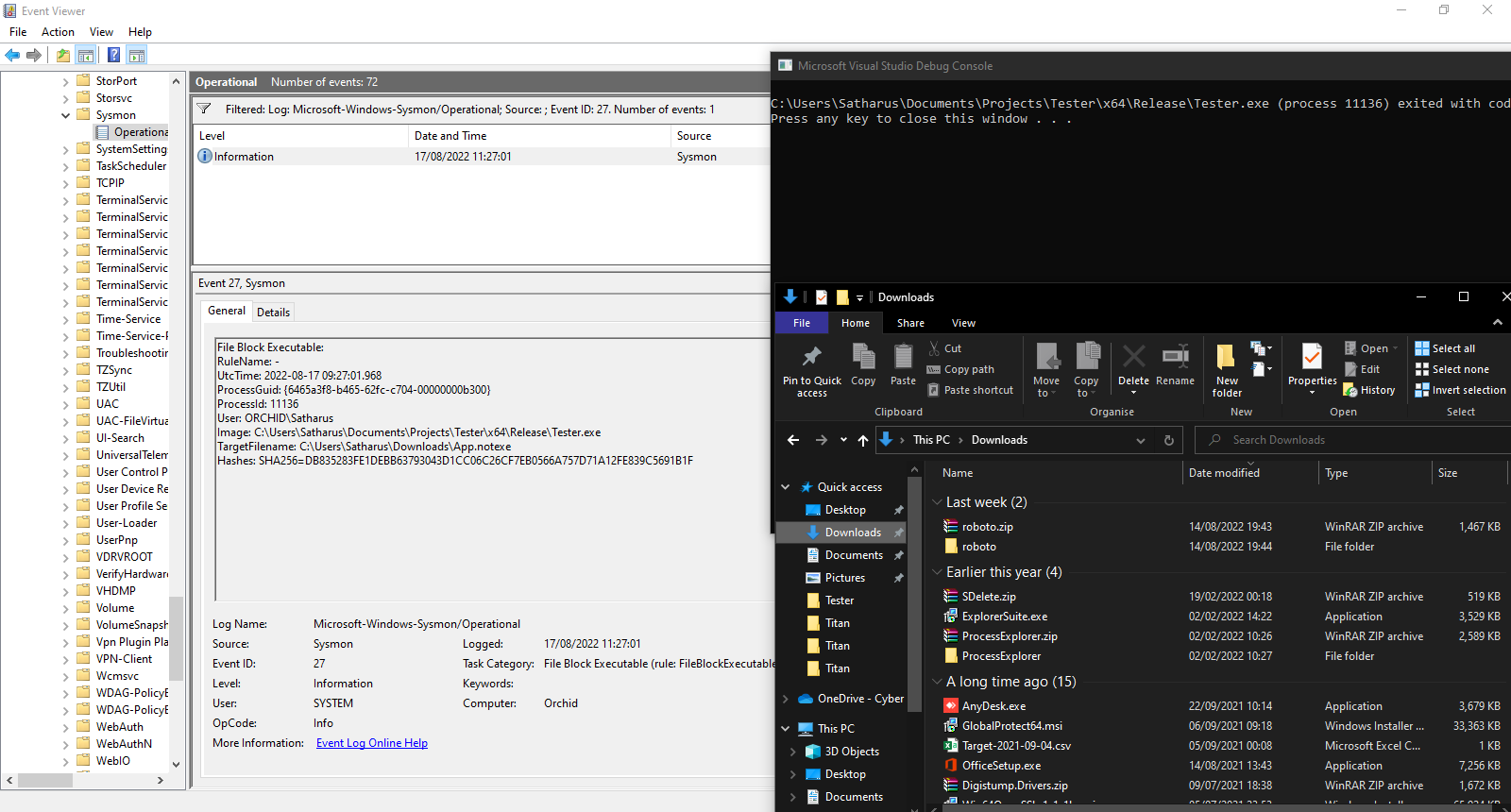 As expected, Sysmon detects the creation of the file and blocks it.

A little bit of background

If you don’t know, file formats typically have a sequence of bytes known as file signatures, file headers, or more commonly, Magic Bytes. They’re used by operating systems and programs to detect file formats even if their names don’t contain the file extension.

The Windows Portable Executable format uses a file header/signature of MZ (the bytes 0x4D and 0x5A). That includes all executables, including .exe, .dll, .sys, etc…

Fun Fact: MZ is used as they are the initials of Mark Zbikowski, one of the lead developers of MS-DOS and the designer of the MS-DOS executable file format (which later became the Protable Executable format).

My very first thought was to zero out the MZ header and try to execute the file as is. That way Sysmon wouldn’t detect it but I’d still be able to execute it just fine. However, that failed as CreateProcess() failed to execute a binary that doesn’t have an MZ header. Running the executable from PowerShell or the command line prompt didn’t work either. Interestingly enough, this proved some points:

So, it seems like Sysmon relies on MZ alongside something else to detect that it is an executable.

Puting two and two together, what if we just wrote the file on two stages. We can write the string “MZ” first, and then write the rest of the file.

At first, I tried making two different calls to WriteFile() using the same file handle obtained from CreateFileA(). Sysmon was able to detect and block that just fine. However, the following steps worked: 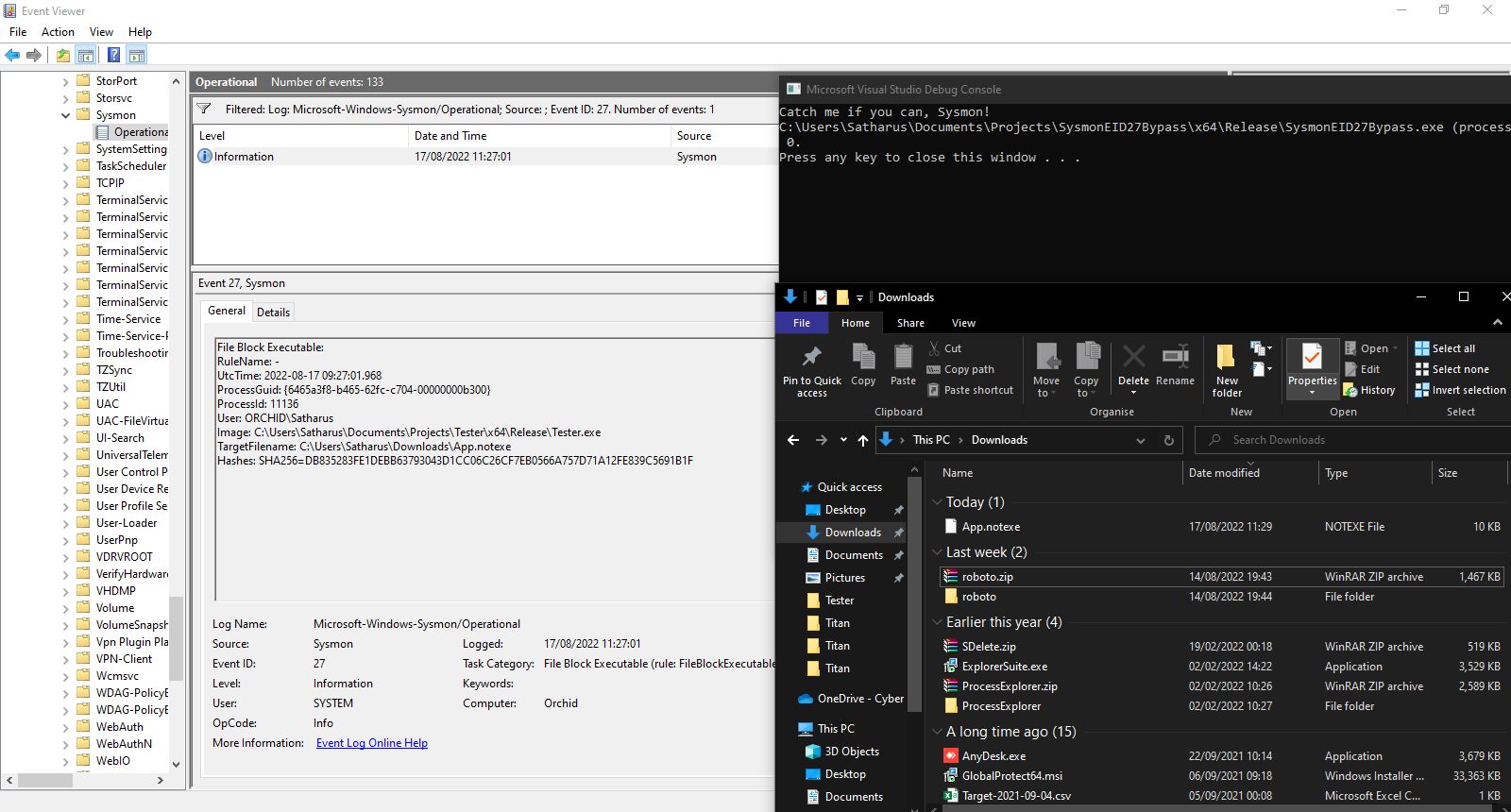 Sysmon doesn’t detect the creation of the file and the process is allowed to execute.

Thanks a lot for reading! As usual, I hope you learned something or at least found it interesting!

If you enjoyed it, please share it with your friends that are interested in simple detection bypasses.

PREVIOUSThere is No Single Roadmap
NEXTTracking Changed My Life!
Search