It was a pretty fun experience for me, as I had never participated in the nationals before. My team and I solved 3 challenges during the CTF and one after it.

Here are the writeups for what we solved:

Note: The text for the challenges is not that accurate because I forgot to take screenshots of the challenges, so I tried to remember what they were approximately.

Text: It was something in the sense of “I run on your system and store everything you type”.

The challenge is really easy, if you’ve been looking into cybersecurity for a while you’ll know that that’s called a keylogger. If you haven’t then you can get it easily through some online searching.

The first thing that came to mind is that it’s a normal binary string! So I tried to convert it to ASCII.

It didn’t work, so I found that the string is of length 135, so I just needed to add one zero to make it divisible by 8 and see how it goes.

It did convert to ASCII, but I got this:

Seems like a load of garbage. So I just figured that it wasn’t ASCII. I did a little bit of searching for “Shakespeare Cipher” and found this image: 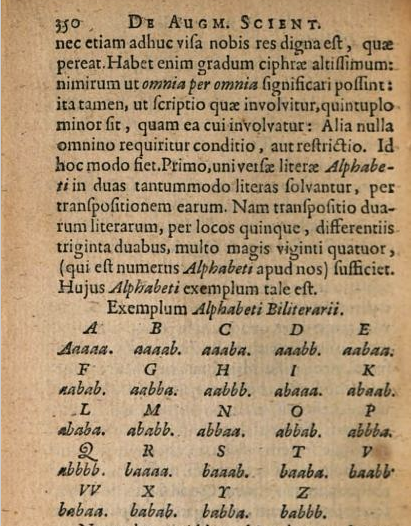 I found out that this type of cipher is called a “Bacon Cipher”, it uses A and B (or basically any 2 characters) to encode the alphabet. Each character consists of 5 bits, kinda like how we count in binary but you move on to the next letter instead of the next number.

This was pretty good info because our original string’s length is divisible by 5.

So I wrote a small C++ program that splits the long string of 1s and 0s into parts of 5 bits each and converts 0 to A and 1 to B.

The output of the program was this string:

I looked up “Bacon Cipher solver” on Duckduckgo and got this site.

After decoding the message, I got this text “INATEDPROTAGONISTVILLIANDOM”.

It seemed like English, so I started dividing it into every possible word trying to get what the flag is.

Until they gave everyone a clue and said “The flag is 3 English words written as is in one string”.

So after about 30 minutes of fiddling around and trying to get the 3 exact words. We reached the conclusion that the third word is “DOMINATED”.

Flag: It turned out to be “VILLIANDOMINATEDPROTAGONIST” or “PROTAGONISTDOMINATEDVILLIAN”. I don’t really remember.

This challenge had a .pcap file attached, so the first thing we tried to do was to open it in wireshark: $ wireshark runecover.pcap.

What a bummer. But hey, at least we don’t have to analyse packets now. My teammate tried to use binwalk on it.

That didn’t get us any useful results, so he tried using foremost.

Aaaand boom! We got the png image.

Text: “I thought songs were meant to be heard”

The challenge had a file attached that was named “Immigrant-Song-Led-Zeppelin(1).wav”.

We tried to listen to the track first for any clues, but we didn’t find anything unusual. We also tried opening it with Audacity but nothing was unusual at all.

So we used binwalk on it, but we got some random SQL files which we decided that at the time, we shouldn’t waste our time with them.

Using Deepsound(a Windows utility), however, my teammate was able to find a .rar file called CS.rar in the audio file. 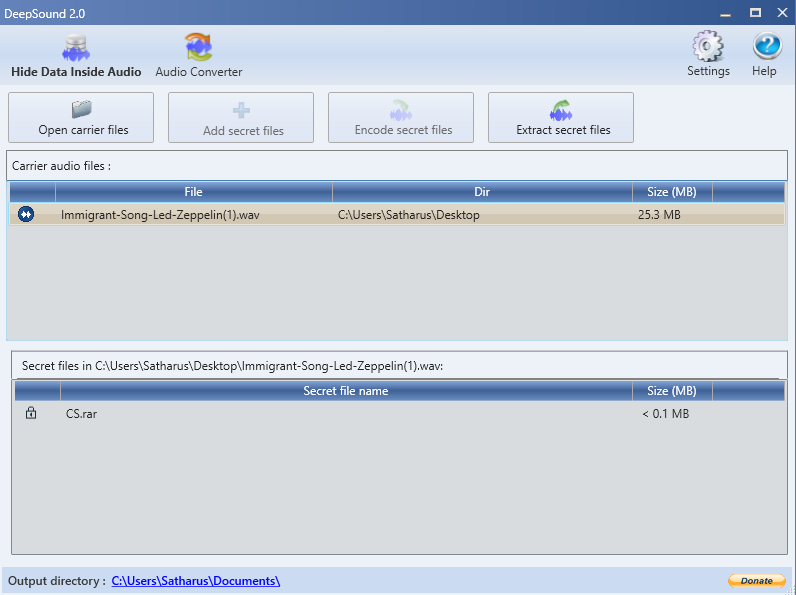 Let’s check what that .rar file has inside!

Wohooo! Now we can get our flag, right? NO. The .rar file is password protected.

We tried bruteforcing the password (using 4 digit numbers), and a lot of other naive brute forcing methods. None worked.

I decided to try using john the ripper.

We tried using john without a specific wordlist, and that took about 2 hours and a half without any progress. So we just decided to scrape it as it got the point where it was just using incremental brute-force.

A quick thought came to my mind to use the famous rockyou.txt wordlist since, well, Led Zeppelin are a rock band. But sadly we didn’t have enough time to finish the brute force.

Note: I was running the brute force on my main machine using 4 threads, which still wasn’t enough apparently.

After the CTF was over, during lunch, a friend told me that when they reversed the “rockyou.txt” wordlist it actually worked.

So I did exactly that, I reversed the file.

I discovered a fun utility in Linux called “tac” which does what “cat” does but in reverse. It reads the file in reverse order.

Why did reversing the wordlist work?

Sidenote: Thanks to Ibrahim Mosaad from State of Security for giving me a tip that sometimes shuffling the wordlist is a better idea than reversing it. Which makes sense as ideally it should give you a better overall average. It really depends on the challenge you’re solving.

Sigh, now we can actually get our flag.

lol jk, you need to base64 decode it first.

There we go, finally.

Flag: CSFLAG{As of right now, we are at war}

I hope this writeup was useful. It is my first writeup so I’d appreciate any feedback on it. Share it with your hacker friends if you thought that it was fun to read :D!